Pregnancy is a beautiful time in any woman’s life.When couples get to know of the pregnancy for the first time, they feel so joyous and excited. This feeling of ecstasy and excitement grips everyone in the family as well as their close circle of friends and acquaintances. They have hopes and dreams about the baby that they want to see in the future.

One such scientific-based option is the 20-week anatomy scan. It looks in detail at a baby’s face, brain, heart, bones, spinal cord, kidneys, and abdomen. It checks if the baby has any of the 11 medical conditions. Some of these conditions are cleft lip, gastroschisis, Edwards’ syndrome, and Patau syndrome. If you are keen to know your baby’s sex, you should tell the sonographer about this when he starts this scan. So he knows what he needs to check.

Some parents don’t want to wait that long, and they are looking for another method that lets them know their child’s sex earlier than the 20-week scan. So they may opt for the Skull Theory method.

What is the Skull Theory method? Is it a reliable and accurate method for baby sex determination?

Let us find out the answers to these questions mentioned above.

Skull theory believes that a baby’s gender can be accurately predicted before the 20th-week scan. By looking at earlier ultrasound images of the mother.

As per the theory, the skull shape and size can help to determine whether the baby will be a boy or girl. 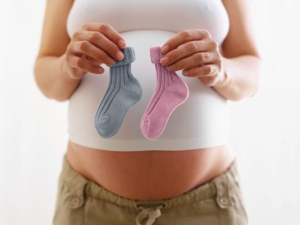 Nobody is aware of the source of origin of skull theory. But it is a popular discussion point among women on pregnancy forums. They ask fellow women to guess about their child’s sex after posting their earlier ultrasound images on them. The commenters may or may not be able to make the right guess.

When does the ultrasound for skull theory need to be conducted?

If you choose the skull theory before the 20-week anatomy ultrasound, you must ensure that your 12-week scans have a clear image.

But obtaining a very clear image can be difficult, and this is because the baby’s position in the womb at the time of the scan can impact how well the skull is visible.

As per skull theory proponents, a mother should try to get their baby positioned in profile so that it becomes possible to measure the skull from front to back. But anecdotal research indicates that even a clear ultrasound doesn’t always make it obvious whether the baby is a boy or girl. This research was conducted on various pregnancy forums.

In skull theory, the general belief is that baby boys tend to have bigger and blockier skulls than girls. Also, they have a defined brow ridge and a square chin, and the jaws of boys are more angled, and their cheekbones are more prominent.

The skull theory claims that in comparison to boys, the chins of baby girls are rounder and they have a wider angle to their jaws. Also, their foreheads are less sloping, and they have smaller brow ridges.

How accurate is the Skull Theory?

Skull theory supporters state its accuracy lies only between 70% and 95%. More research is needed to prove this theory’s viability as an early gender test. The reality is that peer-reviewed journals have little to no evidence about skull theory.

Anthropologists and archaeologists have different takes on skull theory. According to them, the differences between male and female skulls are only visible in adults. And these unique skull indicators generally become more defined following puberty and sexual maturation. These features are used for determining sex at the time of excavating archaeological sites and viewing human remains.

Such differences in male and female skulls are not truly visible in neonatal skulls, thus making skull theory an unreliable option.

Considering the views of anthropology and archaeology experts, it can be understood why skull theory is a great point to begin a conversation. But it should not be depended upon for genuinely ascertaining a baby’s gender.

There is one more fact that goes against the skull theory. Skulls vary greatly between different racial groups and between the sexes.

Skull theory is not the only fun method to try and predict a baby’s gender before a 20-week ultrasound scan. Nub Theory and the ancient Chinese birth predictor are some other similar methods. Nub theory considers the direction the genital tubercle is pointing for sex determination. At the same time, the Chinese birth predictor uses the mother’s age and the month of conception for it. Ramzi Theory is yet another similar method, and it uses the location of the placenta during early pregnancy ultrasounds to predict the baby’s sex. All these methods have no scientific basis. So they can’t be relied upon for your baby’s sex determination.

What are the more reliable methods for baby sex determination?

Now you have discovered that skull theory is more of a fun and less of a reliable method. Your next obvious question is going to be this. Are there more reliable ways to learn about my baby’s sex if I can’t wait till the 20-week anatomy scan?

The answer is yes; these ways do exist. One of them is the testing conducted alongside the nuchal translucency scan.

Let us first tell you more about the nuchal translucency scan.

NT or nuchal translucency scan is an optional test usually completed between the 11th and 14th week of pregnancy. Non-invasive in nature, this scan is primarily used for screening for any abnormalities during your baby’s development.

NT scan is specifically performed to measure the size of the clear tissue that lies at the back of a baby’s neck. This tissue is known as nuchal translucency.

If there is excessive clear space, this may indicate a genetic condition such as Down Syndrome or the presence of one of the various chromosomal abnormalities that may prove fatal to your baby.

The NT scan can also include a blood test to screen the baby for chromosomal issues further. This particular blood test can also accurately determine your baby’s sex.

Both NT scans and blood tests are optional. You may have to specifically request the test unless your age is more than 35 years at the time of delivery or your doctors feel that you carry a higher risk of having a baby with a health complication.

There are galore of non-medical myths that promise to accurately predict your baby’s sex, including the skull theory. But there are only a few ways to predict a baby’s gender accurately, and they have a scientific basis. And these ways are the early blood test done between the 11th and 14th week of pregnancy and the 20th-week anatomy scan. One worth-mentioning point here is that even scientific-based tests do not give 100% accurate results. So be prepared for the surprise when your newborn baby lands in your arms for the first time.

If you want to determine your baby’s gender through a scientific-based method in Livermore, DigiBaby is the ideal place for it. Our services are also available in Woodridge and Mesa locations. We have specialist medical professionals and the latest diagnostic equipment in our ultrasound facilities. It will help to give you a smooth, safe and satisfying medical experience during your pregnancy. So why wait? Contact us today to explain your unique diagnostic needs.